Germany is stronger than ever

Europe bad and good By Editorial Team 3 January, 2021 No Comments

While other nations as USA and Russia fall as brands due to their pseudo cold war play that shifted from Asia and Europe to Africa, Angela Merkel has made out of Germany much more than just a “made in Germany”. The country has become a brand for global values and virtues after being the most destructive country in the world. A nation admired for its stable leadership, Germany is right now the world’s strongest nation brand, BSI score of 84.9 out of 100.

In addition to measuring nation brand value, Brand Finance also determines the relative strength of nation brands through a balanced scorecard of metrics evaluating brand investment, brand equity, and brand performance. For the first time this year, the nation brand strength methodology includes the results of the Global Soft Power Index – the world’s most comprehensive research study on nation brand perceptions, surveying opinions of over 55,000 people based in more than 100 countries.

David Haigh, CEO of Brand Finance, Thinks that “Germany remains a beacon of stability both across the continent and globally. As Merkel prepares to step down as Chancellor in 2021 – a position she has held since 2005 – Germany will be hoping that its history of reliable leadership during times of increasing polarisation across Europe will stand it in good stead in the coming year as the nation works towards a post-COVID recovery.” 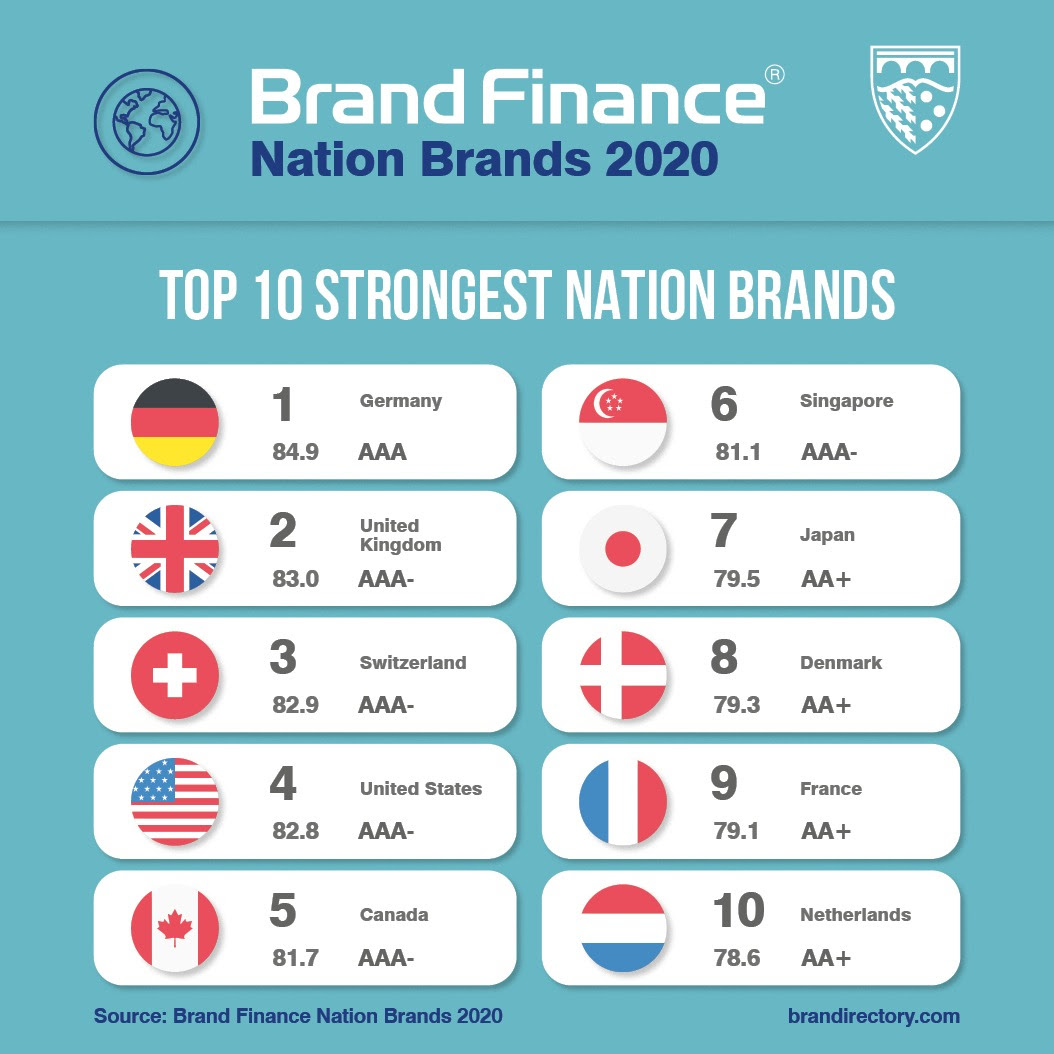 2020 has put the nations of the world to the test – from the economic impacts of COVID-19 on nations’ GDP forecasts, inflation rates, and general economic uncertainty, to diminished long term prospects. The Brand Finance Nation Brands 2020 report estimates that the total brand value of the top 100 nation brands dropped from US$98.0 trillion in 2019 to US$84.9 trillion in 2020, with almost every nation feeling a significant impact of the health crisis on their respective economies.

US & China remain in a league of their own

The US and China remain a cut above the rest, claiming first and second position in this year’s ranking, recording brand values of US$23.7 trillion and US$18.8 trillion respectively. Relations between the two forerunners remain particularly fragile because of the US-China trade war that has consumed both economies over the past few years. Long-standing leader the US, has recorded a 14% brand value loss to US$23.7 trillion, following yet another turbulent year. Now home to both the most cases and deaths of the virus globally, the world’s largest and strongest economy continues to encounter harsh criticism and questioning on the global stage.

With the pandemic wreaking havoc on nation brand values across the world, the top 10 has recorded a brand value loss of 14% on average. Japan has fared relatively better than its counterparts, recording a modest 6% brand value loss to US$4.3 trillion, and inching up to claim third spot in the ranking. Defying the odds of many that expected the nation to be one of the worst hit at the beginning of the COVID-19 outbreak – due to its proximity to China, its densely populated cities, and burgeoning elderly population – Japan has emerged as relatively successful compared to its counterparts, with lower Coronavirus cases and deaths and with its economy faring better.

Luck of the Irish strikes again

Ireland has bucked the negative trend this year as the only nation brand in the top 20 to record a positive brand value growth, up 11% to US$670 billion. This strong performance is largely attributable to its forecasts being impacted less dramatically than others on the global stage – a particularly positive position given the twin threat of Brexit and COVID-19. The Irish economy has proven to be particularly resilient, being supported by strong exports and continued consumer spending. Should the UK reach a deal on Brexit, Ireland will find itself in an even stronger position as trade disruption with the UK will be reduced.

The UK has retained 5th position, following a 14% brand value decrease to US$3.3 trillion. Despite Brexit being forced into the shadow of COVID-19 this year, the uncertainty surrounding the outcome has persisted. The UK government are still engaged in negotiations with the EU, with fishing rights and competition rules as two sticking points for both sides.

David Haigh believes that “the UK enters the final weeks of Brexit negotiations before the transition period deadline at the end of the year, the nation is certainly at a turning point. There is a great opportunity for Britain to become an economy that operates similar to its neighbour, Ireland – with lower taxes and a friendly ecosystem for startups. Should the UK reach a suitable trade deal, Brand Britain could certainly thrive and become the entrepreneurial hub off the coast of Europe as Singapore is in Asia.”

Vietnam is the fastest-growing nation brand in this year’s ranking, its brand value skyrocketing 29% to US$319 billion. Vietnam, which has recorded staggeringly low COVID-19 cases and deaths, has emerged as one of the top locations within the Southeast Asian region for manufacturing, and has become an increasingly attractive destination for investors – particularly from the US – that are looking to relocate their China operations following the fallout from the US-China trade war. Recent trade deals with the EU are supporting the growth of the nation further.

Do cry for me Argentina

In stark contrast, Argentina has recorded the biggest drop in brand value this year, down 57% to US$175 billion. With COVID-19 cases recently passing the one million mark – the smallest nation by population to do so – Argentina has been struggling to respond effectively to the outbreak. Riots have erupted across the nation with protestors calling for a reform of the justice system, corruption cases to be investigated, and to demonstrate general grievances of the handling of the pandemic. The nation’s already ailing economy is taking further hits and the road to recovery will not be short.

GERMAN CULTURE: What strikes a Spaniard?

This site uses Akismet to reduce spam. Learn how your comment data is processed.

This is not a fashion blog. We are Deike Ricardo and Stefanie Claudia Müller, living in Berlin and Madrid running the company: Planet BPM connecting Europe S.L.

Are supporting you and your profession in an United Europe. Go and explore Europe as a place to work and live.